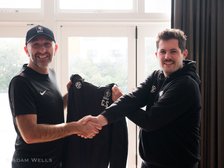 After months of negotiations, haggling (and let's be honest pestering) BNU are proud to announce the arrival of Chris Sperring from Karori as the new BNU First team coach.

Chris was in a bright and bubbly mood on Saturday at his photoshoot with club Chairman Sam Morris and even had time to answer some questions for the Media team!

1 - How does it feel to complete the set, a Brooklyn player, a Brooklyn family member in the set up and finally the top job in coaching Brooklyn?

It’s amazing to be asked back. Brooklyn was also the very first suburb we lived in when we arrived in NZ. It’s the right time for me on my coaching journey and yes I had my arm twisted a bit by my wife. What is it they say, “Stood alongside every great person is a salty pigeon! And not to mention the Social guy of course. For me, I want this club and team to aspire to achieve great things, go further than what we achieved when I was a player here and genuinely be the best supported community club in NZ.

2. - With your knowledge of the BNU club’s social philosophy can we expect to see you grow that and expand it into new dimensions?

You know what, it’s the vibe of the club that really brought me back. I love how diverse we are and how we couldn’t give a rat’s arse what other clubs think of us. So to me, creating a successful team is dependent on leaning on our values and creating the right team culture, as it’s at the forefront of everything we must do. The best bit is that the culture here rocks already and I can see that the legacy of the values that we left behind especially mateship remains as strong as ever. Last season BNU were one of only three teams who stayed for any sort of after match at the Karori clubrooms. And that speaks volumes about team togetherness. I think Matt and Ali did a tremendous job in building that and their work shouldn’t be underestimated. We play a vital role in the community to make sure we attract people to be part of this club. Now more than ever due to Covid, it’s about connecting people and giving people a sense of self. Football matters though and I really can’t wait to sing Molly Malone for the first time as a winning coach.

3 - What style of football will you be looking to play?

I’m told you don’t need a silver fork to eat the best meal in town and if Brooklyn are involved you’re guaranteed it’s going to be emotional.
Whatever style we start with, I can guarantee it will evolve quite quickly with player input. However, it’s important to me that our style becomes recognisable to our supporters and is exciting enough to attract more people to the club.
And I plan on leaning on some of the playing legends of this club to come in and spice things up a bit for the team by doing parts of sessions. I hope that this will be really well received by all and build better connectedness throughout the club. So, watch this space for further announcements.

4 - Which managers influenced your style and approach the most? Will we be seeing the hair dryer treatment or the arms around the shoulders?

So, if we take that question one step further, the clubs that I love and respect are the likes of St Pauli and Forest Green Rovers for how they represent their community and stand for something much more than football. And that is so important, right? I bet every coach wants their teams to emulate Klopp’s team attributes or Guardiola’s style of play in some way. But unless you’ve got 23 video analysts and a bunch of strength and conditioning coaches working seven days a week with the best technical players on the planet, that’s going to be a thankless task. The reality is I am an amateur coach, coaching amateur players to the best of all our abilities for an hour and half, 3 days a week, in Wellington specific conditions. We can tell the players how we want them to play and show the players how we want them to play but unless they have a say in that playing style then it just won’t work. They’re the ones that run out on a Saturday and they must be given the freedom within a framework to express themselves to play. Then the outcome will usually take care of itself. To put it all in perspective, our budget is way less than what the Gunnersaurus was costing Arsenal…and look what happened to him.

But that’s not to say that I don’t take it seriously or that you can’t learn a great deal. That you can copy, paste and edit from the likes of Pep and Jurgen is somewhere along the lines of when football became an obsession for me. I will work hard to make our team the best version of ourselves and demand that the players work hard when we’re on the pitch. As Pep says, “Train like beasts, play like beasts”. I mean, how Brooklyn is that?! But, it has to be fun and it has to be enjoyable because suffering near hypothermia on a wet, cold Thursday night at Wellington College isn’t always the best of use of our time.

Ok, to finally answer your question, people-wise you can’t go past Keith and Colly at this club. Total legends. Frank Klement, wow did that man know football. Ryan (Edwards) at Karori has had the most influence on me and my personal development as a coach and I’ll be forever grateful to him for this. Hard not to go past Declan (Edge) for someone who stays true to his Vision and Philosophy. Matt Calcott for his penchant for winning everything he seems to touch. James Prossar’s teams had an awe and definite style of play about them last term. There is no denying that Brian (Blellock) really knew how to get the best out of us during the 90’s and Deno Bannister much later. And of course, who doesn’t like a bit of Tuchel’s divergent thinking? I’d like to think I’m able to take the best bits from each coach I come in contact with and have played for although, I’m still trying to work out what I got from Keith and Colly …well apart from the habitual abuse and some bad tips for Melbourne Cup horses!

I expect to see gender equality in terms of coaching and gear resources between the Men’s and Women’s First Teams.
I want our supporter base to grow on the back of success on and off the field.

…And I want us competing for the Venus Shield.

Sam was also on hand to answer a few questions and could not hide his grin of a job well done in bringing Chris back to the club!

1 - How important is it to have a person in charge with a strong connection to the club?

Vitally important. Winning means more when you’re doing it for your own club. BNU has a long history and a certain character that you don’t find with other clubs in Wellington. Chris is a BNU boy through and through, which means he can tap in to the club’s culture as a way of motivating his team to perform well. He knows that BNU is much more than just a football club and has a great philosophy on “coaching the person, not just the player”. I’m over the moon that Chris has brought his coaching skill and experience back to Brooklyn where it belongs.

2 - What inspired you to fight to get Chris here and in charge of the men's firsts?

The Men’s First team has been without a highly qualified coach for the last two years. Mat Allen, Ali Luke and Andy Cochran did a fantastic job coaching in the 2020 season, but now is the time to take the next step for the club. The committee knew that Chris would be the one we needed to push us forward, which is why we’ve been pestering him for the last year and a half to come back to coaching Brooklyn. Although from what I hear, this is nothing compared to the harassment he’s been getting from his wife to come back to the red and black!

3 - Can we expect anymore bold and inspired moves in the clubs near future?

I wouldn’t want to give away too much, but what I can say is that we have a lot of ideas and a lot of energetic club members waiting to be shoulder tapped to turn those ideas into reality. 2020 is done and dusted (thank God..) and BNU in 2021 is going to be bigger and better than ever before!

So there it is the First's have got their man and can look forward to a bright bright future under the guidance and enthusiasm of Chris!

Stay tuned for more upcoming news over the summer as the BNU look to go from strength to strength!