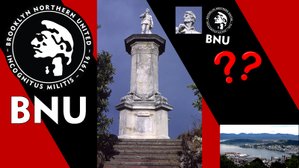 BNU's link to the Anzacs. What does it mean??

Calling all BNU history buffs! Please share your knowledge and stories about the origins of our club logo.

As we enjoy our day off this Anzac weekend, we thought it would be good to look back at some of our club's history.

According to BNU life member Maurice Roche, our current logo design was commissioned by former club committee member Regan Dooley (please share exact or approximate dates in the comments if you have them please!). Regan wanted to use a symbol that was unique to the Wellington suburb of Brooklyn, so our logo became the head of the statue at the war memorial on Te Ahumairangi Hill Lookout (widely known as 'the unknown soldier').

The Brooklyn War Memorial was built to commemorate Brooklyn’s World War I servicemen and has 303 names displayed. The memorial was planned and constructed through the efforts of the Brooklyn Returned Services Association and the people of Brooklyn. In just two years following the end of World War I they raised £700 for its construction. The memorial trustees maintained the memorial for 16 years until they passed it over to the Wellington City Council. There's a map and more information about the history of the memorial on the Wellington City Council website.

The view from the lookout is well worth the walk so why not check it out sometime? And to anyone who has more BNU history or stories they'd like to share, get commenting below or in the Facebook post!